Ukraine: Humanitarian Snapshot (as of 16 November 2017) 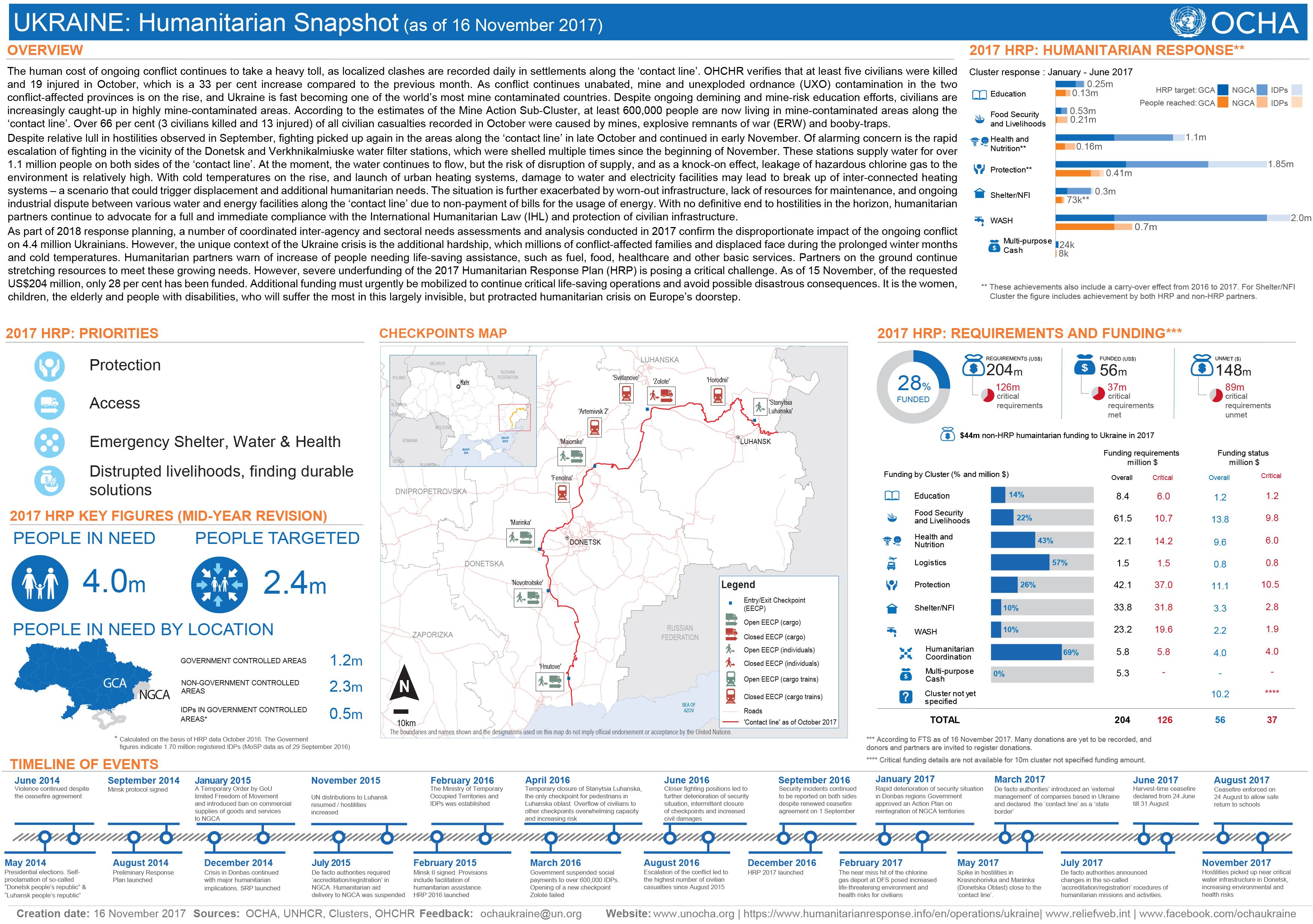 The human cost of ongoing conflict continues to take a heavy toll, as localized clashes are recorded daily in settlements along the ‘contact line’. OHCHR verifies that at least five civilians were killed and 19 injured in October, which is a 33 per cent increase compared to the previous month. As conflict continues unabated, mine and unexploded ordnance (UXO) contamination in the two conflict-affected provinces is on the rise, and Ukraine is fast becoming one of the world’s most mine contaminated countries. Despite ongoing demining and mine-risk education efforts, civilians are increasingly caught-up in highly mine-contaminated areas. According to the estimates of the Mine Action Sub-Cluster, at least 600,000 people are now living in mine-contaminated areas along the ‘contact line’. Over 66 per cent (3 civilians killed and 13 injured) of all civilian casualties recorded in October were caused by mines, explosive remnants of war (ERW) and booby-traps.

Despite relative lull in hostilities observed in September, fighting picked up again in the areas along the ‘contact line’ in late October and continued in early November. Of alarming concern is the rapid escalation of fighting in the vicinity of the Donetsk and Verkhnikalmiuske water filter stations, which were shelled multiple times since the beginning of November. These stations supply water for over 1.1 million people on both sides of the ‘contact line’. At the moment, the water continues to flow, but the risk of disruption of supply, and as a knock-on effect, leakage of hazardous chlorine gas to the environment is relatively high. With cold temperatures on the rise, and launch of urban heating systems, damage to water and electricity facilities may lead to break up of inter-connected heating systems – a scenario that could trigger displacement and additional humanitarian needs. The situation is further exacerbated by worn-out infrastructure, lack of resources for maintenance, and ongoing industrial dispute between various water and energy facilities along the ‘contact line’ due to non-payment of bills for the usage of energy. With no definitive end to hostilities in the horizon, humanitarian partners continue to advocate for a full and immediate compliance with the International Humanitarian Law (IHL) and protection of civilian infrastructure.

As part of 2018 response planning, a number of coordinated inter-agency and sectoral needs assessments and analysis conducted in 2017 confirm the disproportionate impact of the ongoing conflict on 4.4 million Ukrainians. However, the unique context of the Ukraine crisis is the additional hardship, which millions of conflict-affected families and displaced face during the prolonged winter months and cold temperatures. Humanitarian partners warn of increase of people needing life-saving assistance, such as fuel, food, healthcare and other basic services. Partners on the ground continue stretching resources to meet these growing needs. However, severe underfunding of the 2017 Humanitarian Response Plan (HRP) is posing a critical challenge. As of 15 November, of the requested US$204 million, only 28 per cent has been funded. Additional funding must urgently be mobilized to continue critical life-saving operations and avoid possible disastrous consequences. It is the women, children, the elderly and people with disabilities, who will suffer the most in this largely invisible, but protracted humanitarian crisis on Europe’s doorstep.