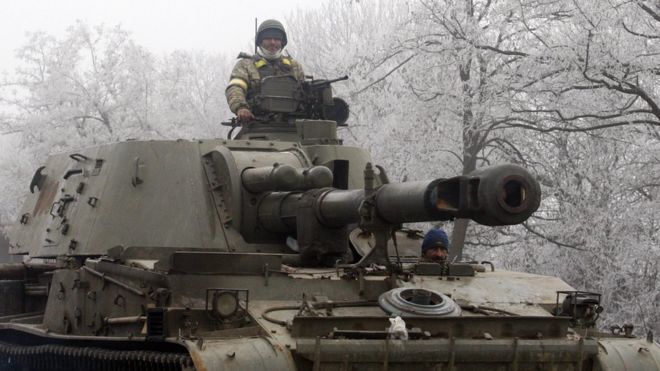 Five Ukrainian troops have been killed by intense rebel shelling in the east of the country, the military says, in a new escalation of fighting.
Four of them died during an eight-hour clash near Krymske, a village 50km (31 miles) north-west of Luhansk. Ukrainian forces say they killed eight rebels.
The pro-Russian rebels used mortars and machine guns, the Ukrainian military headquarters said.
Meanwhile, the leader of rebel-held Luhansk has resigned.
The announcement of Igor Plotnitsky's resignation came amid reports of a power struggle in the region.
The UN says more than 10,000 people have died since the eastern Ukraine conflict erupted in April 2014, soon after Russia annexed Ukraine's Crimea peninsula. The fighting has displaced more than 1.6 million people.
The rebels remain in control of a large swathe of territory in Luhansk and Donetsk - mainly Russian-speaking regions.
Some heavy exchanges of fire were also reported on Thursday near the Azov Sea coast, in Donetsk region.
On Friday, a statement on the rebel Luhansk Information Centre website said the leader, Igor Plotnitsky, had resigned "due to health issues, emanating from his injuries sustained during the war and concussion consequences".
It came from Leonid Pasechnik, the region's "state security minister", who said he had taken over from Mr Plotnitsky.
On Tuesday, armed men in camouflage, without insignia, blocked access to some administrative buildings in Luhansk, hours after Mr Plotnitsky had sacked his "interior minister" Igor Kornet. Mr Plotnitsky accused Mr Kornet of fomenting instability.
Western governments accuse Russia of helping the rebels with regular troops and heavy weapons. Moscow denies that, while admitting that Russian "volunteers" are helping the rebels.
Source: http://www.bbc.com/news/world-europe-42108007