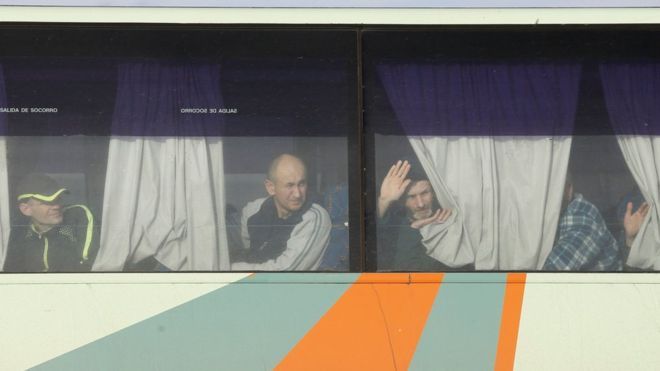 Ukraine and separatist rebels in the east of the country have exchanged hundreds of prisoners, in one of the biggest swaps since the conflict began in 2014.
Some 230 people were sent to rebel-held areas in return for 74 prisoners who had been held by pro-Russia rebels in the Donetsk and Luhansk regions.
It was the first swap in 15 months.
The release and exchange of prisoners was one of the points in the Minsk peace agreement, signed in 2015.
The deal has stalled since and analysts say the swap does not signify wider progress. Both sides continue to hold other prisoners.
The number of prisoners swapped was lower than initially announced after dozens of people who were meant to be returned to rebel-held territory refused to go to the other side.
"Some of them have already been released and the charges against them have been cleared by the Ukrainian authorities and then they prefer to stay in the government-controlled side," Miladin Bogetic, spokesman for the International Committee of the Red Cross in Ukraine, told the BBC.
Two Ukrainians - a man and a woman - opted to stay on the rebel side, AFP news agency reports.
The months-long negotiations for the exchange saw the involvement of presidents Vladimir Putin of Russia and Petro Poroshenko of Ukraine, as well as the head of the Russian Orthodox Church.
Buses and other vehicles carrying the prisoners assembled at the Mayorsk checkpoint near the city of Horlivka in Donetsk for the swap.
Historian Igor Kozlovskiy, 63, who was captured by Donetsk rebels on suspicion of storing weapons, told AFP: "I was in captivity for two years... Still a lot of prisoners remain [in Donetsk]."
The UK government said the prisoner swap was a "welcome step towards meeting the commitments all sides have made".
The conflict in eastern Ukraine erupted in April 2014, soon after Russia annexed Ukraine's Crimea peninsula. The UN says more than 10,000 people have died in the Donetsk and Luhansk regions.
Source: http://www.bbc.com/news/world-europe-42493270