1 in 6 children now living in areas affected by conflict, Save the Children report says 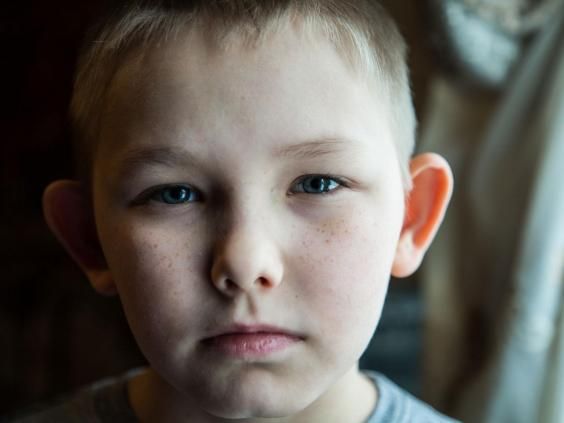 Denis* was just six years old when his house in Ukraine was hit by a shell, leaving him with shrapnel wounds to his skull and body.

Doctors were unable to remove all the shrapnel over fears it could cause nerve damage and leave him without movement in his arm, so the remaining fragments remain under his skin.

He is one of at least 357 million children who are now living in areas around the world impacted by armed conflict, a report by the Save the Children charity has revealed.

Since 1991, the number has increased by 75 per cent, with one in six children globally now considered to be living in areas where they are vulnerable to grave violations of their human rights.

Such violations include killing and maiming, sexual violence, the recruitment and use of children, abductions, attacks on schools and hospitals and the denial of humanitarian assistance.

"When I lost consciousness, I saw a dream, where there was a shelling, many casualties, and many wounded children who got under the shelling," Denis, who is now nine, told Save the Children. "Some children had their legs torn off, because they stepped on the mine."

His mother abandoned him and his brother and he now lives with his grandmother, in a flat a few kilometres away from the fighting.

His grandmother said the family still experiences shelling on a regular basis and described how the children shake with fear.

Asked what she would say to people who think there is no conflict in Ukraine, she said: "Let them try to live here. I would feed them, I would give them the shirt off my back, and I would not take any money for the rent. Let them try. They wouldn't stand the hour.

"The fighting is taking place here, ongoing heavy shelling. So heavy, that even here the windows are shaking. Regardless of the fact that there are people still living on a contact line. People here are dying like flies."

The number of United Nations-verified cases of children being killed or maimed has increased by almost 300 per cent since 2010, while incidents of the denial of humanitarian access have increased by more than 1,500 per cent, the "War on Children" report said.

The rise has been fuelled by a growing lack of respect for the rules of war and indiscriminate violence in countries such as Syria, Afghanistan and South Sudan.

The report found children have increasingly been used as suicide bombers, while schools and hospitals have been deliberately targeted and children maimed and killed as a result of the widespread use of indiscriminate weapons, such as cluster munitions, barrel bombs and improvised explosive devices (IEDs).
Two in five children in the Middle East live in a conflict zone, the highest rate globally, while one in five children is affected by conflict in Africa. Asia has the highest overall number of children affected by conflict.

Syria, Afghanistan and Somalia were the most dangerous conflict-afflicted areas in the world to be a child in 2016, the last year for which comprehensive data is available.

Keven Waters, CEO of Save the Children, said: “The marked increase in the number of children living in conflict-affected areas, combined with the worsening violations against those children by warring parties, should worry all of us.

“We face a stark choice. Do we stand by while more children die in school attacks or in their hospital beds - or are denied life-saving aid - or will we tackle the culture of impunity and end this ‘war on children’?”

The organisation has launched a petition calling on the foreign secretary, Boris Johnson, to take action to protect children affected by the war in Yemen.
Source: http://www.independent.co.uk/news/world/children-conflict-war-living-save-the-children-report-357-million-a8211161.html