Ukraine: Land of Hope or Hustle? 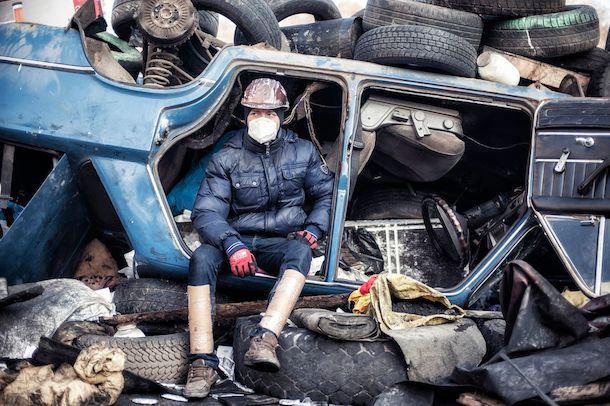 Four years after a popular revolution ousted a corrupt president during the Euromaidan movement that culminated in the flight of former President Viktor Yanukovych in February of 2014 and the Russian annexation of Crimea the following month, Ukrainians today might well ask themselves as Ronald Reagan once asked Americans: “are you better off today than four years ago?”

Indeed, the country is once again at a cross-roads, and if public opinion polls are any indication, the historically freedom loving Ukrainians are unhappy with their current situation.

War with Russia continues in the East, displacing more than 1.5 million and costing lives every day. After Russian President Vladimir Putin’s foregone re-election this past Sunday, Russia may take an even more aggressive position against its smaller neighbor.

And corruption is arguably worse than before the Euromaidan. The net worth of Ukrainian President Petro Poroshenko has grown by more than 40% since he’s been in office, and Poroshenko has thumbed his nose at the IMF’s insistence he set up independent, anti-corruption courts.

If the poster-child for reform, or hope, were the former Georgian President Mikheil Saakashvili who came to Ukraine during Maidan to share Georgia’s success story in tackling public graft, then hope, like Saakashvili, has been jettisoned by Ukrainian officials tired of embarrassment and scandal — Saakashvili was recently tossed out of Ukraine.
The poster child for the hustle, meanwhile, would be ex-convict and politician Vadim Rabinovich. Sentenced by Soviet authorities in the 1980s for stealing materials from veterans, Rabinovich is also reported to have sold T-72 tanks to the Taliban in the 1990s. He is a fast-talking businessman who fashions himself after America’s Donald Trump, but whose accomplishments have been more often considered swindles than deals.

Rabinovich’s “For Life” party has recently been infused with large, mysterious funding. Some suspect it comes from the presidential administration, eager to distract hard-pressed, Russian-speaking Eastern Ukrainians before next year’s scheduled elections. Others suggest it comes from a Russian businessman who recently grew his fortune rebuilding Moscow.

The poll numbers of “For Life” have been rising, in part because Rabinovich has captured the anger and disillusionment of many, particularly in the East. But for a country that has risked, and lost, so much for its freedom, what would the ascent of Rabinovich mean, if not to foreign investors, than to the average Ukrainian, who sees his or her paycheck shrinking every month?

Ukraine’s association with “the hustle” has served its national brand poorly.

Allowing a hustler to become the country’s face will likely be the end of hope for a country that once longed to be part of Europe.