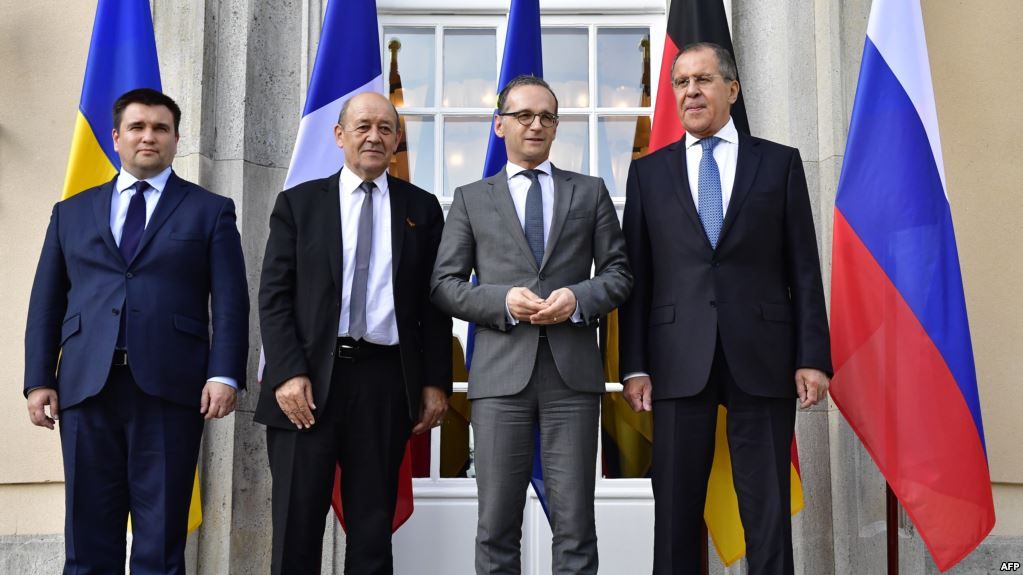 IBERLIN —
The foreign ministers of Russia, Ukraine, Germany and France met in Berlin on Monday to discuss the implementation of a fragile ceasefire for Ukraine and the deployment of a UN peacekeeping mission in the country's conflict zone.

German Foreign Minister Heiko Maas said after the four-way talks that Russia and Ukraine agreed in principle on a U.N peacekeeping mission, but their ideas about how to implement it were still "very much apart."

"Regarding the parameters of a possible U.N. mission for Eastern Ukraine, we agreed to instruct our political directors to continue negotiations not about if but how such a mission could happen and discuss this in the coming weeks," Maas said.

It was the first meeting of the foreign ministers since February 2017, though lower level officials have met regularly in the past four years in the so-called Normandy format to try to resolve the separatist conflict in Eastern Ukraine, in which more than 10,000 people have been killed.

Relations between Moscow and Kyiv have been tense since a popular uprising drove a pro-Russian president from power in 2014. Russia went on to annex Crimea from Ukraine and backed a pro-Russian separatist insurgency in the country's east.

A ceasefire agreement that was signed in February 2015 in Minsk has failed to end the violence, with fighters from both sides violating the peace plan on a nearly daily basis.

"We know that there was a lack of will to implement these commitments in the past," Maas said in a joint news conference with his French counterpart Jean-Yves Le Drian.

Maas said all sides agreed that they should stick to the Minsk peace plan from now on, including the removal of heavy weaponry from combat zones and a further exchange of prisoners.

France and German also offered Ukraine and Russia logistical help for the securing of minefields in the combat zones, he added.

"I am firmly convinced that the political negotiations today are also exerting pressure on the ground," Maas said, despite the apparent lack of progress in the negotiations.