Anxious Ukraine Holds Its Breath Ahead Of Trump-Putin Summit 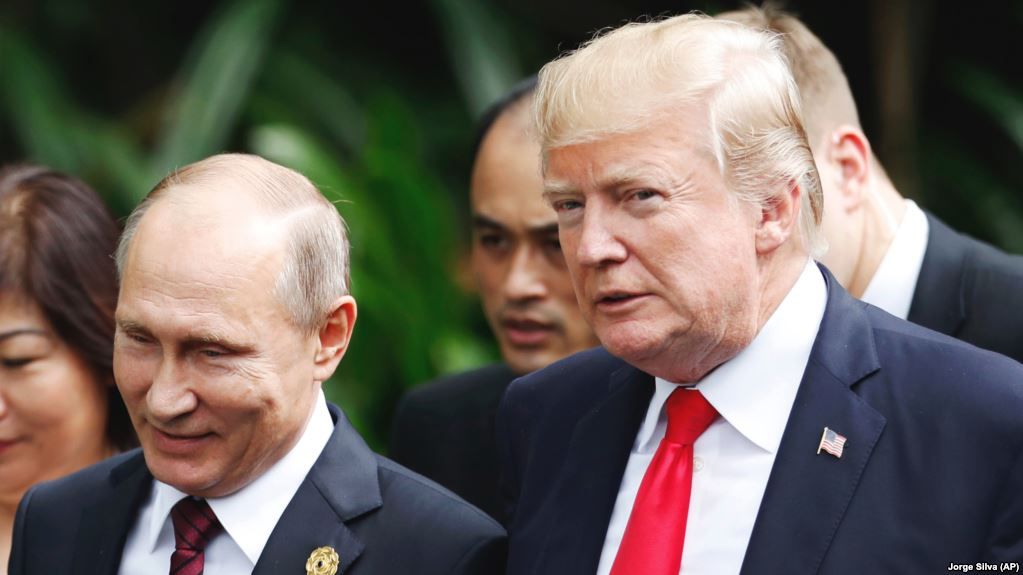 KYIV -- Aboard Air Force One on June 29, U.S. President Donald Trump suggested he may consider recognizing Russia's claim to Crimea, which was forcibly annexed from Ukraine in 2014.

"We're going to have to see," Trump told reporters, adding that such a move would be up for discussion when he sits down with Russian President Vladimir Putin in Helsinki on July 16. "I'll talk to him about everything."

The remarks caused an uproar that reverberated across an anxious Europe fearful that an unpredictable Trump could overturn longstanding U.S. policy and effectively accept the first major land grab on the European continent since the Second World War at his meeting with Putin.

Meanwhile, in Kyiv, the comments were met with a collective gasp -- and the Ukrainian capital has been holding its breath ever since.

Ukraine, now in its fifth year of fighting Russian aggression on fronts both physical and digital, has relied greatly on U.S. diplomatic, financial, and military support that until now has been unwavering and even included lethal Javelin antitank missiles.

"We do not recognize Russia's attempt to annex Crimea," Sanders said. "We agree to disagree and the sanctions against Russia remain in place until Russia returns the peninsula to the Ukraine."

But, as the Helsinki summit nears, five senior officials and politicians close to those in the administration of Ukrainian President Petro Poroshenko and Prime Minister Volodymyr Hroysman's cabinet recently admitted in conversations with RFE/RL that they still fear Trump could be persuaded by Putin to accept Russia's annexation of Crimea -- or even a broader deal in which Washington would acknowledge Ukraine as part of Russia's sphere of influence.

Ahead of her trip to Brussels for the EU-Ukraine and NATO summits this week, Ivanna Klympush-Tsintsadze, Ukraine's deputy prime minister for European and Euro-Atlantic integration, expressed concern over Trump's recent statements and acknowledged his unpredictability.

Asked how the Ukrainian government took Trump's Crimea remarks and how it is preparing for the Trump-Putin summit, she said that "Over these past two years we've been putting our expectations and trust in U.S. institutions that are strong and we are producing policies based on our national interests."

Volodymyr Ariyev, a member of the Ukrainian parliament and a close ally of Poroshenko, was blunter. He told RFE/RL he hopes Trump "will not make Ukraine a bargaining chip."

"We don't know exactly what they're going to discuss. We can guess some topics and keep hoping that Trump wouldn't like his name to be mentioned in history as the names of [Soviet Foreign Minister Vyacheslav] Molotov and [German Foreign Minister Joachim von] Ribbentrop [are]," Ariyev said, referring to the infamous 1939 nonaggression pact between Adolf Hitler's Germany and Josef Stalin's Soviet Union.

The Ukrainian politicians' comments reflect a nervousness that has occupied Kyiv since the first day of the Trump presidency.

Trump, who in 2014 called Russia's invasion of Ukraine "so smart," has unabashedly praised Putin, calling him a "strong leader" and echoing positions held by Russia since taking office.

For instance, BuzzFeed News cited two diplomatic sources in reporting that Trump told Group of Seven (G7) leaders in Quebec last month that Crimea is Russian because everyone who lives there speaks Russian. Those comments have been neither confirmed nor denied by the White House.

On July 5, Trump again spoke favorably of the Russian president, whose military is believed by many to have hacked Ukrainian power grids, invaded eastern Ukraine, and provided the missile launcher that shot down Malaysia Airlines Flight MH17, telling supporters at a rally in the state of Montana that Putin is "fine."

"He's fine. We're all fine. We're people. Will I be prepared [for the Helsinki summit]? Totally prepared. I've been preparing for this stuff my whole life," he continued.

'They Should Be Worried'

On the condition they not be identified because of the sensitivity of the matter, one Western official briefed on the Trump-Putin summit told RFE/RL, "Of course, [Ukraine] should be worried."

"We're doing the typical planning [for the Trump-Putin summit] that normally happens, but [with Trump] there's always the possibility that he goes off script," the official said.

U.S. policy has not changed, the official said, and there is no effort to sell out Ukraine.

"There is not some grand bargain being set," the official added. "This is a get-to-know-you, turn-down-the-temperature-and-see-where-things-are meeting."

Volodymyr Fesenko, a Ukrainian political and security analyst, told RFE/RL that he's skeptical about Trump making any concessions on the Crimea question, as well as the possibility of a grand bargain between Trump and Putin at the expense of Ukraine.

"Without the consent of Ukraine and supporting Ukrainian society it will be impossible to implement any peace plan for Ukraine," he added.

There was a palpable anxiety at the U.S. Embassy's Fourth of July party in Kyiv last week, where Dmytro Shymkiv, deputy head of the Ukrainian presidential administration, expressed concern but was careful not to speculate on what may or may not happen at the Trump-Putin summit.

"We will watch closely and we hope that he will not accept the Russian aggression against our country," Shymkiv said. "The U.S. has been a close ally of ours and it would be a shame to see it change the stance on Crimea."

Showing measured defiance, however, Shymkiv said that if the U.S. stance would shift, Kyiv would remain steadfast.

"Crimea is Ukraine and not even an American president can change that -- not with a statement or a tweet," he said.