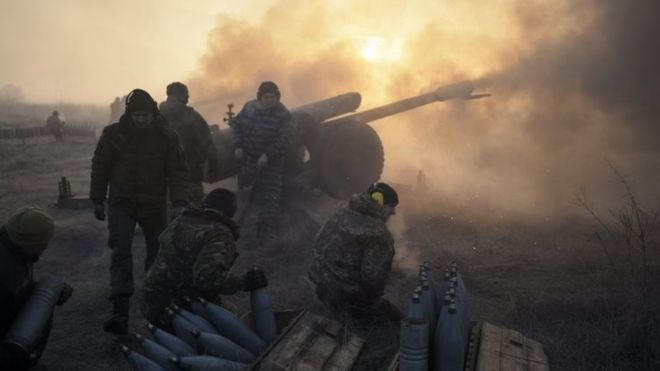 Four died during a five-hour clash near Krymske, a village 50km (31 miles) north-west of Luhansk. Another was killed by artillery fire.

Ukraine and pro-Russian rebels have blamed each other for violating the current ceasefire.

The deaths come amid a spike in violence following clashes last week.

Ukrainian negotiators have said that a new ceasefire is due to come into effect on 29 August, in time for the new school year.

Moscow denies sending its troops and providing weapons to the separatists, but admits that Russian "volunteers" are helping the rebels.

"The Russians... are trying to attack the positions of our troops, violating the ceasefire," he said.

On Saturday two Ukrainian soldiers and two rebels were killed in a clash.

More than 10,000 people have been killed in the conflict in eastern Donetsk and Luhansk regions - which are known collectively as Donbas - since 2014.

The insurgency broke out after Russia annexed Crimea from Ukraine.

On Thursday Mr Poroshenko apologised for saying back in 2014 that the conflict would be resolved in "hours".

"I am truly sorry that I gave hope which did not come true," he said.