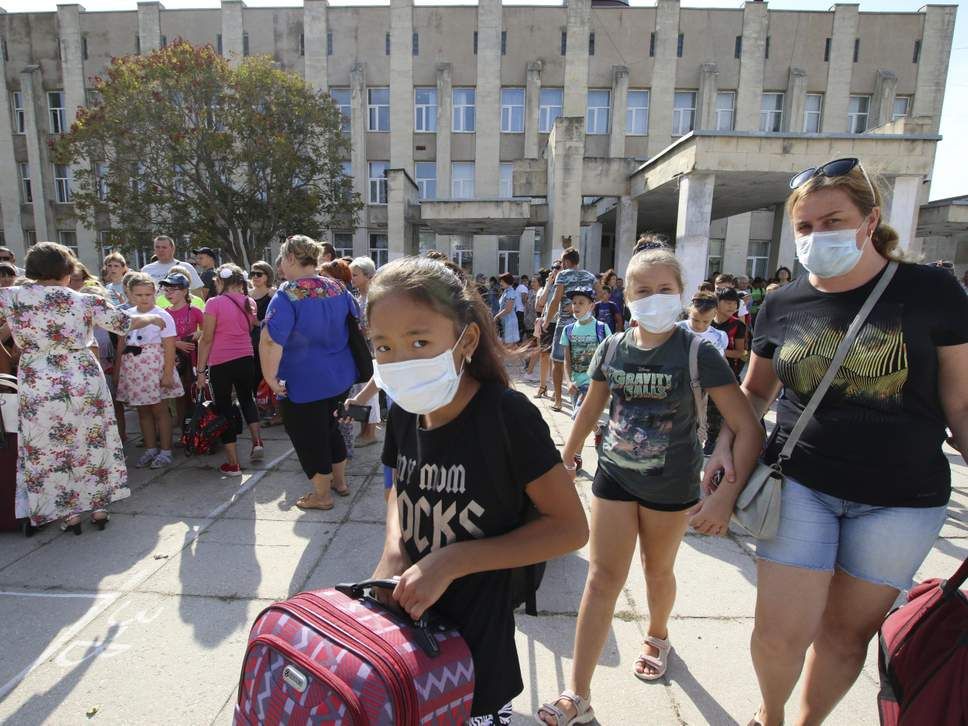 A strange mist blew into one town, residents said. There and elsewhere, people noticed that metal items like children’s swings were rusting, and they felt a shortness of breath. Fields turned black.

Pollution has been blowing across the de facto border between Russian-controlled Crimea and mainland Ukraine since August, prompting authorities to evacuate about 4,000 children from towns and villages on both sides of the border.

Ecologists and doctors say the culprit was a significant release of industrial pollution, which has resulted in many children being treated for breathing ailments and allergies.

The border between Russian-controlled Crimea and mainland Ukraine has been a geopolitical flash point since Russia annexed Crimea in 2014, adding an extra complication to the ecological crisis.

Russian and Ukrainian officials have offered differing explanations for the problem, though both point to a Crimean chemical factory that makes titanium dioxide, a powder that is a precursor for paint, toothpaste and many other products.

Over decades, the factory, Titan, formed a gigantic effluent pond of sulphur waste that has acidified. Russian authorities say the pond is the source, while Ukrainians point to current operations at the factory.

Residents who remain in the area close their windows and stay indoors.

Armyansk, a city on the Russian-controlled side with a population of about 22,000, was an eerie ghost town when Abdureshyt Dzepparov drove through in early September.

“It was unnatural,” he said. “There were few people in the town. The leaves had fallen off the trees, though it was very early fall, and the grass in the fields was black.”

Before the Russian annexation of Crimea, a canal diverting water from the Dnieper River in mainland Ukraine had fed the pond during dry summers.

Ukraine, which along with the United States and European nations has refused to recognize the annexation, has since cut this water supply, drying up the pond, concentrating the acid and leaving a residue that is now blowing about.

Residents on both sides of the border have complained of coughing, allergies and a burning sensation in the nose and throat.

“People were on edge, very nervous,” Svitlana Godun, a pulmonologist who visited four of 12 affected villages on the Ukrainian side of the border, said in a telephone interview. “They worried about their future and their health.”

The Russian authorities in Crimea shut the factory a week ago. It is unclear how this would help if the effluent reservoir is to blame.

On Friday, the Russian regional government in Crimea declared a state of emergency in Armyansk, where many people were wearing face masks because of the sulfurous stench.

Viktor Korolenko, head of the health care department of the Kherson region of Ukraine, which borders Crimea, said doctors are concerned not only about the breathing complaints, but also about stomach ailments in children eating contaminated fruit and vegetables, or ingesting chemicals picked up on their hands.

“The pollution fell on pears and apples,” which are harvested at this time of year,” he said.

The titanium dioxide plant has operated for nearly half a century and employed about 4,000 Crimean residents. But those living on the Ukrainian side of the border now see it as a threat.

“We are used to sulphur when the wind blows in our direction, but there has never been rust everywhere,” said Liliia Simeiko, 44. “If it corrodes metal, it also has an impact on the lungs.”