Growing Old Amid Shelling and Frostbite in Ukraine 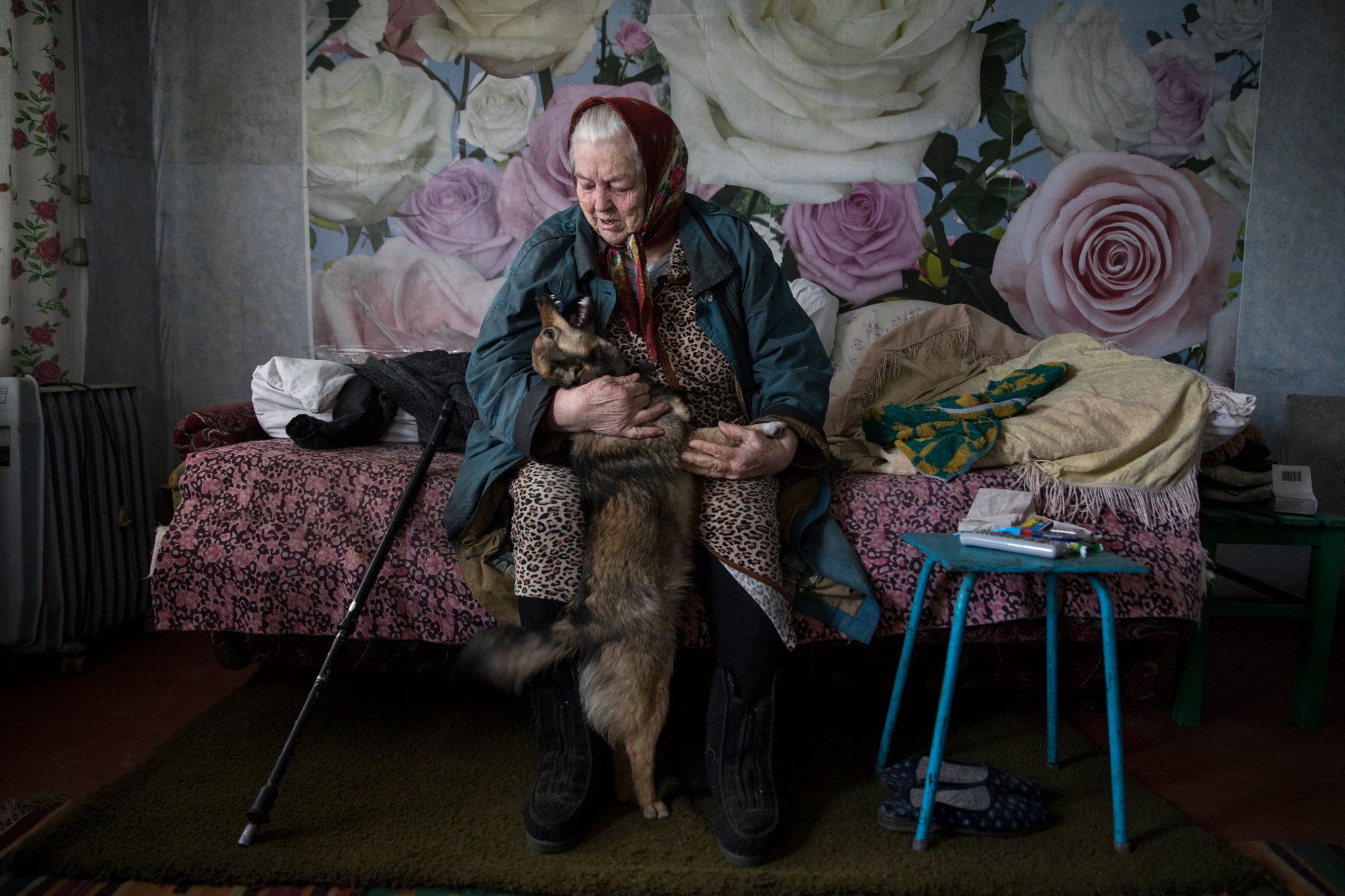 To look at Paula Bronstein’s images of the elderly people trapped in Ukraine is to see lives frozen by conflict. Through bitterly cold winters, residents board up their windows and try to avoid shelling and frostbite. When the ground thaws in the summer, those who are physically able tend to their gardens before being sent back inside to stay out of firing range.

Joy comes in small moments — a woman receiving a donation of baby chicks; a relative’s visit. Some have not seen their families since the conflict began, even though they live only a few kilometers away.

For the elderly, the conflict is characterized by waiting inside dilapidated homes while struggling to keep warm, safe, healthy and clean — increasingly difficult tasks as the years wear on.

Ms. Bronstein has spent much of her career documenting conflict. From her work on endless war in Afghanistan to her coverage of the Rohingyain Myanmar and Bangladesh, her photography is close, raw and unflinching. “The way you get people to care, in my mind, is you talk about the people,” she said in a recent interview. “You talk about the people affected by war. Then we get to a more intimate story about war.”

Her new work, “Ukraine’s War: A Dire Situation — The Elderly,” looks at the conflict in eastern Ukraine’s Donbas region, which has resulted in more than 10,000 deaths and the displacement of 1.6 million people. The conflict between the Ukrainian military and Russian-backed separatists started in April 2014 after protests known as the Ukrainian revolution of 2014 or the Euromaidan Revolution. Those were sparked by then-president Viktor Yanukovych’s rejection of a trade deal with the European Union, and Russia’s invasion and annexation of Crimea shortly after.

While a cease-fire was reached in September 2014, the agreement has been consistently disregarded, and fighting persists throughout the region. Within this conflict that has been largely ignored, Bronstein has focused on another neglected group: the elderly.

With the support of a grant from Getty, she took two trips to eastern Ukraine last year, driving the length of the border and visiting villages on both sides of the 280-mile contact line, the border that separates Russian-backed districts and the rest of Ukraine. She found that once-bustling towns and villages had been neglected and abandoned; older people were trapped in their homes, the windows boarded up against the frequent shelling.

If there is a hierarchy of attention during a war, it is not a stretch to believe that the older population — especially those left behind, trapped and isolated — is near the bottom of that list. Ms. Bronstein’s subjects are those embroiled in a war that is often eclipsed by other news around the world, and themselves eclipsed by issues deemed of higher importance within the conflict.

Navigating the region, especially crossing the contact line, is difficult, with shelling and gunfire erupting frequently, often once night falls. Communities and villages once well-connected are now cut off, with transport between Donetsk, Luhansk and villages on the other side of the contact line restricted, and the Donetsk airport destroyed. Bronstein says the Russian-backed areas of the Donbas region feel like Russia: its currency is spent, its language is spoken.

The quiet, desolate feeling during the day belies the conflict’s magnitude. Despite a cease-fire, shelling and gunfire persist, especially at night. The difficulty of moving around, both because of limited transport and frequent fighting, makes it hard for people on the Russian-controlled side to cross into Ukraine to get their pensions, which for many is their only source of income. A recent landmark decision by the Supreme Court of Ukraine may change the need to travel to receive a pension, though the ruling’s effect is unknown.

Worse, many older people have limited mobility because of declining health. For those who stayed behind, the results are tangible. They live with stress and in squalor, with many unable to maintain proper hygiene.

Ms. Bronstein’s work shows how this unending stress and trauma affect the body — through premature aging, reduced immune function, and increased inflammation and hypertension. Bronstein heard that nine out of 10 elderly residents die not from violence, but from stress-related ailments, like heart attacks.

Some extended family members in towns not far away visit only sporadically because of the conflict; they cannot afford to have the older generation move in with them. But others simply do not want to leave. Many of the elderly, Ms. Bronstein said, are essentially waiting to die in the homes where they have always lived, close to relatives who might be buried nearby.