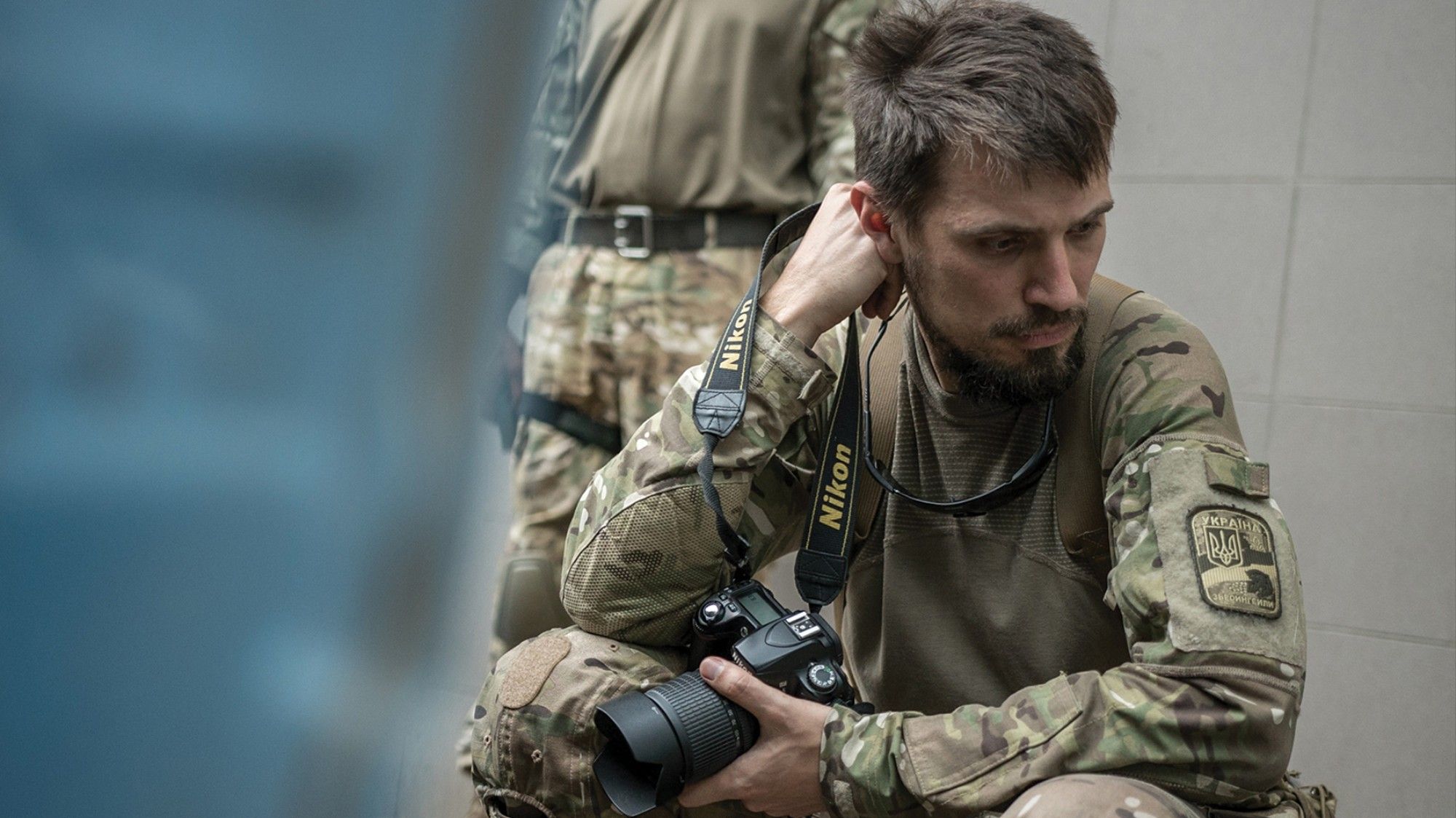 Yuri was holding a Kalashnikov assault rifle and was decked out in a tactical vest and balaclava when I first met him. We were huddled inside a rusted Brink’s-style armored van, converted into a frontline vehicle meant to withstand bullets and roadside bombs, as the shelling started.

It was the summer of 2016 in the Promzona, a frontline position in Donbass, a region that remains the most violent site in the ongoing war in eastern Ukraine, a conflict pitting Ukrainian regulars against Kremlin-backed Separatists who many suspect are simply Russian military. The Promzona is an industrial tract built into an area known for fuel refineries, and it resembles a Hollywood set of what people think war looks like: abandoned homes with traces of past lives strewn about and streets pocked with the unmistakable flowers of shell explosions. Stray dogs lurk among dirty children’s toys and piles of discarded clothes, begging for food from those who’ve refused to leave their homes even in the face of grinding conflict.

Yuri, then a member of the Ukrainian special forces, who asked to be identified only by his first name, sat motionless, completely unfazed, as we waited, listening to the whistles and pings of bullets and the occasional boom of an artillery round. He’d been in this van and this place for too long.

“The soundtrack of Ukraine,” he said with a shrug, gesturing to the outside noises with his eyes. He’d go on to fight for another six months.

When Yuri’s war ended he came home. The job was over. And the new one—of reintegrating as a civilian and making a living—had begun.

Still reeling from the 2014 political revolution that overthrew the pro-Russian Ukrainian government, Ukraine, home to 45 million people, has nearly 8 million citizens ages 14 to 29, many of whom have seen war. The West seems to have largely forgotten about the war in Donbass, though Ukrainian government figures show almost 350,000 soldiers have fought in the active conflict, which at press time had left more than 10,000 dead. Many of these military personnel are Millennials who have been sucked into the labor of war and now face uncertain prospects in a country rife with Soviet-era boomer corruption, an uneven economy, and a lack of job opportunities.

As one of the largest and most disempowered demographics in this eastern European nation, Ukraine’s youth are at a crossroads. According to an extensive 2017 sociological survey of Ukrainian Millennials by the Friedrich-Ebert-Stiftung Foundation and the New Europe Center, a Kiev-based, pro-EU think tank, the top concern among young people is economic security. Only 1 percent of respondents said they make enough money to live comfortably, while the rest said they struggled to pay bills, find a well-paying job, and be otherwise independent.

“Millennials come in all stripes and with all sorts of backgrounds, including some veterans of the war,” Matthew Rojansky, an expert on Ukraine at the Washington, DC–based Wilson Center, told me. “They, and others affected directly and indirectly by the war, have had and will continue to experience some of the problems that are associated with all wars—PTSD, displacement, disconnection from their families and communities. These things will necessarily complicate their prospects in every sense, including gainful employment.”

Yuri, now 34, encapsulates that struggle: A father of one, he’s trying to subsist while praying his country never gets completely invaded.

Yuri grew up idolizing military service—his father and grandfather were both soldiers in the Soviet armed forces—and entered Kharkiv Air Force University, before being commissioned as an officer in 2006. He left the military five years later, but when protests flared in 2014, the fledgling Ukrainian government, fresh from ousting the corrupt president Viktor Yanukovych (who fled to Russia), called on former troops to protect the country from Russian-backed Separatists in the east. Yuri didn’t hesitate, though the decision has driven a wedge between him and his parents, who are based in Crimea and staunch supporters of the Russian state. Yuri says he’s been estranged from them since he decided to fight against Putin’s regime.

Eventually, the war took its toll—because he was a member of the special forces, parts of Yuri’s military career remain top secret—and when his contract was up at the end of 2016, he returned home to his wife and newborn son in Kiev.

When you’re on the front lines, Yuri wrote me, “You have orders, you have your brothers, whom you can trust 100 percent, and you have your enemies. All is clear. In civilian life, things are much more complicated, enemies are [hidden], friends are uncertain.”

It’s not the first time I’ve heard a vet express this sentiment, referring to the complexity of modern life versus the near-tribalism and primitivism of conflict, which can bring out the very best and worst in humans. Giving to the greater good is what many ex-soldiers want, and returning vets I’ve spoken to in my time as a conflict reporter often talk about needing purpose after their tours are over. Since Vietnam, the dominant narrative has painted the contemporary vet as a victim. But while finding support or the camaraderie of combat is a common struggle among those returning from service, many vets yearn for new objectives beyond collecting a veteran’s check. In Yuri’s case, he quit his first post-service gig as a marketing analyst because the job felt mundane and meaningless compared with his time as a soldier. Besides, he didn’t feel like himself anymore.

“I noticed some signs of PTSD after my return,” he told me. “Insomnia, flashes of rage and aggression, lack of appetite, lack of attention, depression.”

Unlike some vets, Yuri knew he needed help and has since sought free care from a therapist who works for an independent veterans support group. “She helped me to fight with this,” he said. “And now I feel much better.”

Yet the war will always be there for him and others, notably those fellow vets who’ve told Yuri about showing up to work and immediately feeling the emotional gulf between their co-workers and themselves. “Many veterans suffer from problems with their bosses, who either don’t understand what is inside a veteran’s head or don’t want to keep such a person in the company, thinking, ‘That veteran is dangerous for others,’” he told me.

The chairman of the Ukrainian parliament’s committee for veteran affairs, Oleksandr Tretyakov, has asserted that more than 1,000 veterans of the war in Donbass have killed themselves since 2014, though the real figure is likely higher given the difficulties of tracking suicides. According to government figures, the war has produced more Ukrainian vets with post-traumatic stress than the Soviet-Afghan war in the 1980s, in which many Ukrainians served. Meanwhile, state support for mental health is minimal, and the social stigma surrounding PTSD can discourage veterans seeking aid. And for vets in rural areas outside major metropolitan centers like Kiev or Kharkiv, where the cost of living is higher, finding adequate mental health services comes with the added barrier—and expense—of travel.

The current thinking around combat-related PTSD, nonetheless, defies the notion of the broken soldier racked with guilt and flashbacks. As the journalist Sebastian Junger carefully outlines in Tribe, his 2016 book on the reintegration of soldiers to Western society, most veterans with PTSD aren’t permanently damaged; the majority of PTSD cases, rather, are short term. Beyond government payments, what soldiers really need is for society to understand what they’ve gone through and bring them back into the fold with a purpose.

“Today’s veterans,” Junger writes, “often come home to find that, although they’re willing to die for their country, they’re not sure how to live for it.”

In Ukraine, civilian organizations have emerged to meet the mental health and job support needs of veterans. Pobratymy (“Brothers in Arms”), for example, is a Kiev-based grassroots organization made up of psychologists and other mental health and social workers who travel the country offering support to vets working through trauma. Some former soldiers have even banded together to fill the employment gap and provide the camaraderie of the front line through veteran-run businesses that function as work collectives to help returning soldiers find jobs. One popular pizza parlor in Kiev, called Pizza Veterano, is owned and operated entirely by vets.

In 2017, there were signs the country was beginning to take veterans issues more seriously. Public outcry led the Ukrainian health ministry to investigate veteran suicides. It found most were under the age of 30, had been unemployed, and had killed themselves using a firearm, and that overall only one in three veterans of the current Russian conflict had seen a therapist. And in February of this year, President Petro Poroshenko’s ruling party announced plans to create a specific ministry for vets based on the US Department of Veterans Affairs, set to launch sometime in 2019.

Not much is known about the proposed ministry or how it will support veterans in finding employment once their tours are over. “But to the extent Ukraine succeeds more broadly with its big reform agenda items—health, social welfare, anti-corruption—the new Ukraine should actually be a much better and more welcoming place for [Millennials] to rebuild their lives,” Rojansky, the Wilson Center director, added.

When a soldier is welcomed home to a communal role and a sense of contributing to the collective, it’s a powerful feeling. For Yuri, life changed when he found his calling in journalism because of his need to be “more useful for my country.” He’s now the deputy editor in chief of The Ukrainian Week, a current affairs magazine, where he covers politics and the military.

“I cannot predict the future,” Yuri told me, adding that he’s since conquered his bouts with PTSD. “But as a journalist I try to do my best, making this future more Ukraine-friendly.”

For now, the former soldier remains in the military reserve, his weapon and gear at the ready if the call comes for him to defend Ukraine for a third time. “I see my future life only in this country,” Yuri said. “If needed, I will fight again for its independence.”