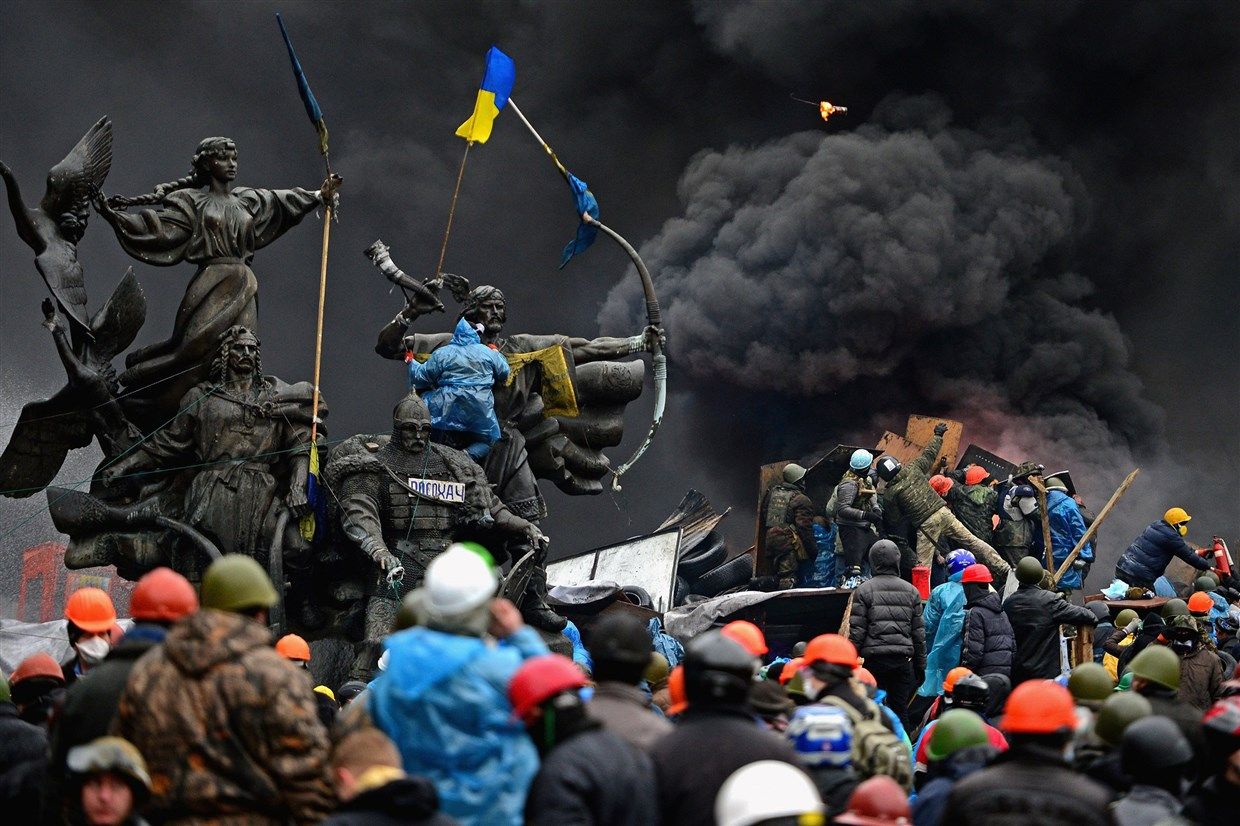 KIEV, Ukraine — Bricks, safety helmets and remnants of barricades are piled in makeshift memorials in the cobbled streets near Kiev's main square.

At least 50 anti-government protesters were killed here five years ago Wednesday, including many who were shot by snipers. It was the bloodiest day in months of demonstrations triggered by pro-Moscow President Viktor Yanukovych’s refusal to sign an agreement to forge closer ties with Europe.

Photos of the fallen remain scattered around the perimeter of Maidan Nezalezhnosti, or Maidan, as it’s called by locals. Many show the spots where protesters were fatally shot and are draped in blue and yellow ribbons — the colors of the Ukrainian flag.

The dozens of people who lost their lives during the Maidan Revolution became known as the "Heavenly Hundred." A stretch of the street where many of them were killed now bears that name.

In the days before Wednesday's anniversary, mourners brought flowers and candles to the square. Some look on in silence. Others wipe off tears and say a prayer.

“Maidan is still a place of pain for me,” said Yevgen Nasadyuk, who was among the protesters there in 2014.

Nasadyuk, 33, initially showed his solidarity with the anti-government rallies in the capital by helping to launch demonstrations in the eastern city of Donetsk in November 2013. Weeks later, he traveled to Kiev where he helped to build barricades and tended to those injured in clashes with police.

Nasadyuk, an entrepreneur and part-time theater director, says many promises were made to protesters — including some by people now in power. And while he feels few of those promises have truly been met, it all comes down to the bottom line for him.

“The biggest thing is that our country was saved,” he said. “In 2014, there was a feeling that Russian troops would be everywhere. My friends and I were seriously deliberating starting a resistance movement in Kiev should the need arise. It didn’t come to it.”

He added: “But what became important since then was the direction that we took as a country. We are taking our own path. And in this way, my expectations were satisfied — the simple fact that we didn’t become part of Russia or its satellite state.”

The investigation into the deaths in the square is still ongoing. It's under dispute who ordered snipers to shoot at the crowds on Feb. 20, 2014. Four law enforcement officers also died from gunshot wounds that day, complicating the probe.

However, the violence turned millions of Ukrainians against the government. Yanukovych fled to Russia the day after.

The government of Russian President Vladimir Putin and Yanukovych have always insisted that the 2014 protests were a coup, but many Ukrainians refer to the uprising as a "Revolution of Dignity."

Months later, Russia annexed the Crimean Peninsula from Ukraine and backed pro-Moscow separatists in the eastern region of Donbass — a conflict that escalated into an ongoing war that has claimed the lives of more than 10,000 people.

Ukraine lost 7 percent of its territory with the annexation of Crimea and the formation of self-proclaimed republics in the east.

The pro-Western government that later came to power has pushed for closer European integration, a key demand of the protest movement.

However, the war in Eastern Ukraine grinds on.

“We live in the context of a never-ending hybrid war with stories of people on the front lines dying every day,” Nasadyuk said. “It seems there is this inability to solve it and so much uncertainty. It remains a wound that’s just left untreated.”

Victoria Savchuk was 20 and in her third year of college when the rallies got underway. She helped fellow protesters who were shot by snipers in Maidan in 2014.

“It was a very scary time. Really chaotic,” Savchuk recalled.

Despite the death toll and horrors she witnessed, Savchuk says she would do it again if she had to.

“We truly got our independence in 2014,” said Savhuck, who works for an anti-corruption nongovernment organization in Kiev. “Before then, I think our independence was nominal. But five years ago, we consciously chose it. It was really palpable after the protests.”

Savchuk, 26, says Maidan will always be “a place of remembrance” for her.

She walks past a street where protesters were shot on her way home from the office every day.

While a recent poll found that 70 percent of Ukrainians think the country is in need of “radical changes," Savchuk feels Ukraine is moving in the right direction overall.

“But the positive changes that we have seen came about because of the pressure from the people,” she said. “We have to always keep an eye on what’s happening and make sure we are not going backwards. We have to constantly protect these changes.”