Where getting water means putting your life on the line 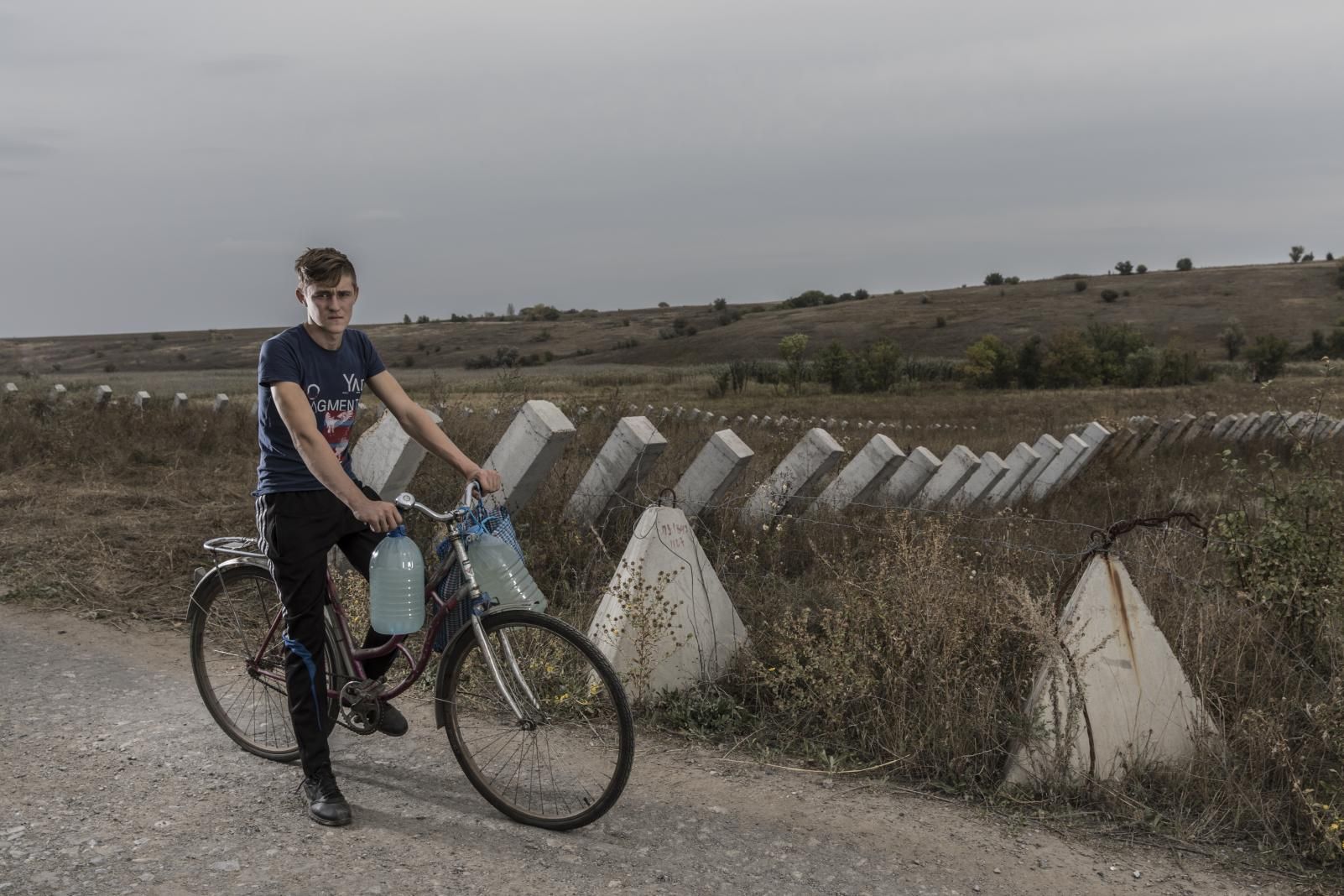 BAKHMUTKA, Ukraine – Before 2014, the people of Bakhmutka in eastern Ukraine could not have known that their children would be forced to travel to school through a conflict zone, that they’d need to collect water from a well, or that they would have to run to their basements at night to take shelter from shelling.

But five years later, all this is now part of everyday life.

Dima, 15, lives with his mum and dad on a farm near the so-called line of contact, which divides the government and non-government areas and where fighting is the most severe. Dima and his family fled their home in 2014. Soon after leaving, their house was shelled.

“I feel like a grown up because I’ve been through so much,” says Dima. He has short blonde hair and talks in short bursts. He says he loves animals, particularly dogs, and wants to be a vet when he grows up. He also misses playing volleyball and watching football with his friends. As he talks, volleys of mortar fire thud in the distance.

Dima was 11 years-old on a spring day in 2014 when he walked down to the river behind the house to collect grass for his pet rabbits. It was here, by the family’s water well, that the shooting began. Shells flew overhead, setting fire to the trees in the valley. “I dropped to the ground and began crawling towards the house. I wasn’t thinking anything,” says Dima.

Dima's mum says that he still gets nervous, and that sometimes at night he’ll wake up screaming “Stop! Stop!” Yet, when the pipes freeze in winter or the power lines are cut by fighting, Dima must go back to the well to fetch ground water so his family can drink, cook and wash.

From bad to worse

Lack of water is just one of the many hardships of the conflict in Ukraine. Children who have no choice but to remain near the hazardous contact line are often forced to drink unsafe water when fighting has damaged the pipes.

Without clean water, schools and hospitals can’t function and heating systems break down. The situation is particularly dire in Ukraine’s extreme winters, when temperatures can drop to minus 20 Celsius.

Fighting along the line of contact has disrupted the region’s electricity as well as water supplies. The networks were badly in need of repair before the conflict; now they are regularly cut by direct shelling. And yet, families living along the line of contact have nowhere else to go; most say they couldn’t afford the rent in safer parts of Ukraine.

When the water stops, UNICEF helps provide bottles and tanks of clean water for people in need. It also supports the distribution of jerry cans, hygiene kits, winter clothes, school supplies, boilers and heaters during the winter months – and assists the main water providers with the supplies they need for urgent repairs.

In Donbas, the same water network supplies families on both sides of the line of contact so stoppages hurt everyone. But the pipes are still constantly targeted by shelling. Repairs require a temporary halt to fighting in predetermined areas - and the opposing sides must agree to uphold it first.

Workers can only carry out repairs once a path has been cleared through fields of unexploded ordnance and mines, which are spread across this no man’s land. If they hear shelling while they’re working on the pipes, the repairmen take cover in cement ditches and wait until it subsides, one of the workers explains, speaking from his office next to the contact line. Repairs like these take days, sometimes months.

In the centre of Bakhmutka, 13-year-old Edik arrives home from school. He’s had a long journey on the old school bus that regularly breaks down as it travels through military checkpoints and across shell-scarred, frontline adjacent roads. But even when he gets home, he can’t go straight out and play – he must first collect water from the well in the centre of town.

In 2015, heavy fighting meant the water pipes were cut from nearby non-government-controlled Horlivka to his family’s block of flats. At the time of writing, they hadn’t had running water since.

“Me and my dad bring most of the water for my family,” Edik says, referring to a groundwater well installed close to their block of flats. “I feel tired, but I have to go to the well.”

Back in the town square of Bakhmutka, Edik’s little sister, Lisa, wanders around as we talk. His mum, Lena, tells me that when she was pregnant with Lisa she had to go down to the local river in the freezing cold to fetch water for the family. “It was like ancient times,” she says, rocking Lisa on her hip.