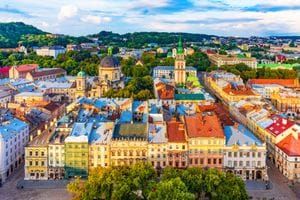 While Ukraine is one of the largely undiscovered spots in Eastern Europe thanks to its political and economic struggles, it’s also incredibly rich in architecture and beauty, making it a lovely place to visit. Currently, there is a Level 2 travel advisory for Ukraine, so while you should exercise increased caution, it’s safe as long as you avoid the eastern parts of the Donetsk and Luhansk oblasts, or provinces.

Kiev, the capital of Ukraine, is one of the oldest cities in Eastern Europe (legend says it was founded in the 5th century), with a population of 2.9 million. Located on the Dnieper River in north-central Ukraine, it is overflowing with exquisite churches, ancient architecture and plenty of history.

A visit isn’t complete without stopping at the St. Sophia Cathedral — which took about 20 years to build and dates to the 11th century — and to Kiev-Pechersk Lavra, a unique burial ground built by monks in 1051. Before the Holocaust, the city had one of the largest Jewish populations in Eastern Europe, and the Central Synagogue, now the Museum of Jewish Heritage, is also worth a stop. And don’t miss Khreshchatyk, the main shopping street in Kiev, where you can also get killer street food such as shashlik: skewered grilled pork or lamb.

Drawbacks to Kiev include corruption (police may ask tourists for bribes) and a lack of customer service that may seem shocking to visitors. If you want to visit another architecturally stunning Ukrainian city — yet one that’s a little more modern — then go west to Lviv, which is located five hours by train from Kiev.

In Lviv, you’ll find art and culture, and a serious coffee scene

This quaint city (pronounced Liv-eev in Ukrainian) looks like an old-school European destination, complete with cobblestone streets, classical music festivals and its wild celebrations of Ukrainian poets. Lviv — population 700,000, believed to have been founded in the mid-13th century — is known for its art and its culture. Be aware that while it’s undoubtedly cosmopolitan, Lviv is also known to be a hotbed of Ukrainian nationalism. Wander through Rynok Square to admire the colorful buildings (pink! yellow!), the cafes, shops and restaurants.

Food is a big deal here; restaurants range from the traditional to the hipster but tend to focus on Ukrainian staples. Coffee shops abound; in the 1600s, a Lviv native was the first person to pair sugar and milk and open a coffeehouse (though in Vienna). Today, you can visit its namesake — “Under the Blue Bottle” — where coffee is prepared on an open fire in copper jugs in a candlelit room.

An Instagram-worthy oddity here is the open-air Second-hand Book Market, where books are casually strewn across old folding beds near the statue of Ukraine’s first book printer, Ivan Fedorov. You’ll also find souvenirs such as Russianrecords and Ukrainian dolls.

You may return with more souvenirs than you planned, because Ukraine is very inexpensive at the moment. A nice hotel in the city center will cost about $70 per night; dinner will run about $4 per person. In fact, Ukraine is so affordable, you might not have to choose one city over the other.