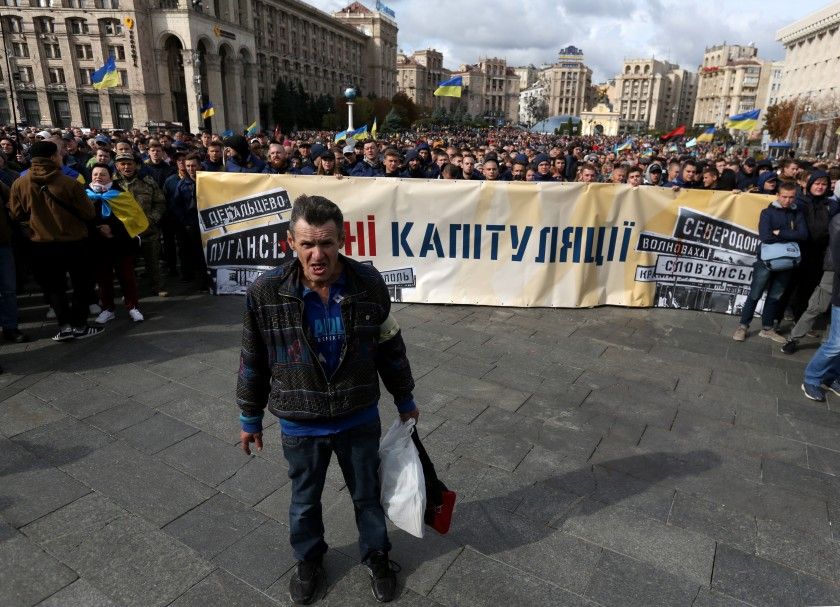 Police estimated as many as 10,000 demonstrators gathered in the capital Kyiv’s central Independence Square to demand that Zelensky reconsider his proposal to allow elections in Ukraine’s eastern territories controlled by Kremlin-funded separatists. The protesters said Zelensky’s plan amounted to a capitulation to Russia.

Zelensky, a former comedian who won by a landslide in April, wooed voters in part by promising to end the war with Russian-backed militias. The armed separatists seized control of much of Ukraine’s eastern industrial heartland known as the Donbas region in 2014, a conflict that has resulted in the deaths of more than 13,000 people and the displacement of some 2 million more.
The conflict followed the 2013 Maidan street revolution in Kyiv, which forced Kremlin-favored President Viktor Yanukovych to flee to Russia. Moscow then annexed Ukraine’s Black Sea Crimean peninsula in March 2014.

But voters’ hope that a Zelensky presidency would bring change was quickly overshadowed last month when he and his country became key players in a now-infamous July 25 call with Trump. In that call, Trump asked Zelensky for help investigating former Vice President Joe Biden and his son Hunter Biden’s business dealings in Ukraine. That call is now the basis of an impeachment inquiry asking whether Trump abused his official powers.

No evidence has emerged to support Trump’s claims that the Bidens were involved in any corruption schemes.

The demonstration Sunday highlighted that for many Ukrainians, the toll that the war has taken on the country of 43 million is far more important to the nation than Zelensky’s involvement in U.S. political turmoil.

Ukrainians have expressed frustration that their country has been dragged into a U.S. domestic political scandal, as Ukrainian soldiers continue to die on the front lines in the east.

Previous attempts to resolve the Donbas conflict have failed.

In 2014, former Ukrainian President Petro Poroshenko oversaw the Minsk peace plan intended to stop the fighting in eastern Ukraine. It was signed by Russia, Ukraine, and representatives from the self-declared Donetsk and Luhansk People’s Republics.

The Minsk plan included a ceasefire, which neither side has ever fully held. It also required each side to pull troops back more than a mile from the front line. That has happened only sporadically along the 249-mile long line. Ukraine announced last week that it planned to pull troops back in two more locations in coming days.

Zelensky said that he was adopting an idea floated by Frank-Walter Steinmeier, who was then Germany’s foreign minister and a participant in the Minsk talks. Steinmeier is now the German president.

The Steinmeier Formula, as it has become known, proposes allowing the separatist-occupied territories to hold elections following Ukrainian laws, under the supervision of the Organization for Security and Cooperation, or OSCE. If the OSCE declares the elections free and fair, Ukraine would grant the eastern territories a special self-governing status. Ukraine would then regain full control of its easternmost border, currently occupied by the Kremlin-backed separatists and Russia.

“Ahead of us lies a long and complicated road to resolve this problem,” Zelensky said in a video address after announcing in a press conference his adoption of the plan. “I will never betray Ukraine.”

“If he has enough political fortitude and guts to follow it through, I think he will prove himself to be an honest politician, courageous and capable of carrying out decisions he makes,” Putin said last week.

The Kremlin’s approval of Zelensky’s backing of the Steinmeier Formula made Ukrainians immediately suspicious, many said Sunday.

Russia can’t be trusted and Putin has lied repeatedly in the past, said Dmytro Garastovych, 34, a Kyiv-based programmer. Georgia and Moldova, also former Soviet republics, compromised with Russia and now both have territories out of their control with Russian soldiers on the ground, he said.

Vitaly Guba, 21, a medical student, had draped Ukraine’s blue and yellow flag around his shoulders, as many in Sunday’s crowd had.

“I and most of my friends voted for Zelensky, and I feel now as if I have been had,” he said. “I never wanted Ukraine to surrender to Russia. The Steinmeier Formula is a trap Zelensky should not have fallen into.”

Sunday’s demonstrations were largely made up of protesters wanting victory against Russia, Bortnink said.

“The problem is, most of them have no idea what the Steinmeier formula is about,” he said. In addition, the Russian reaction factor is an effective Kremlin manipulation tool, he added.

Russia succeeded in discrediting the initiative by voicing its approval, Bortnink said.

“We should insist that this territory is ours, and there should be no compromises,” said Petro Bondarevsky, 37, an entrepreneur in the IT sector, as he stood with his wife and two friends on Independence Square. “The outcome should be that we get all of our territories back, Crimea and Donbas, and that’s all.”

A summit between Zelensky, Putin, French President Emmanuel Macron and German Chancellor Angela Merkel known as the Normandy Format is scheduled for the end of October to further discuss ending the conflict.