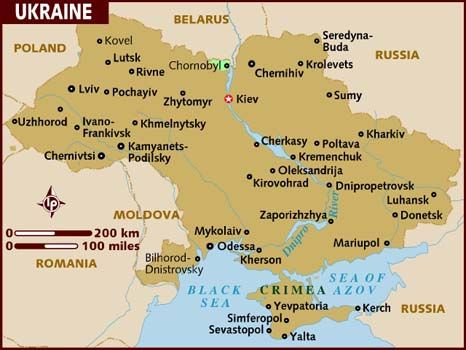 Here's some background information about Ukraine, the second-largest European country in area after Russia. It borders Moldova, Romania, Hungary, Slovakia, Poland, Belarus, Russia and the Black Sea in Eastern Europe.

Other Facts:
Prior to the 20th century, Ukrainian territories were controlled at different times by Russia, Poland, Lithuania, Mongols, Cossacks and others.

From the 18th to 20th centuries, Russia and the Soviet Union carried out a program of Russification to discourage Ukrainian national identity.

Timeline:
1917-1920 - Following the 1917 Russian Revolution and toward the end of World War I, Ukraine is briefly an independent nation.

1932-1933 - Soviet leader Joseph Stalin's policy of collectivization leads to the Great Famine (Holodomor) in which millions of Ukrainians die of starvation.

1941 - During World War II, Germany invades Ukraine. More than six million Ukrainians, the great majority of them civilians, die in the war.

1944 - The Soviet Union regains control of Ukraine and expands its borders to include territory taken from Romania, Poland and Czechoslovakia.

April 26, 1986 - Reactor 4 explodes at the Chernobyl, Ukraine, nuclear power plant, releasing large amounts of radiation into the atmosphere. More than 30 people died and countless others later died from radiation symptoms. The government evacuated some 135,000 people from the area and the 19-mile exclusion zone around the plant remains uninhabitable.

December 1, 1991 - The referendum for independence passes with 90% approval.

December 8, 1991 - Ukraine joins the new Commonwealth of Independent States, along with Russia and Belarus.

October 31, 2004 - In the first round of presidential elections, Yanukovych and Yushchenko both receive about 40% of the vote.

November 21, 2004 - Preliminary exit polls from the run-off election give Yushchenko a lead of 52% to Yanukovych's 43%, but Yanukovych is officially declared the winner. Independent election monitors allege fraud.

December 26, 2004 - Yushchenko wins the election with about 52% of the vote and is sworn in as president a month later.

January 2009 - Gazprom again cuts off supplies of natural gas to Ukraine over a payment dispute.

January 17, 2010 - Presidential elections are held. President Yushchenko receives only 5% of the vote. Yanukovych receives 35% and Tymoshenko receives 25%, necessitating a run-off.

February 14, 2010 - In the presidential run-off, Yanukovych wins 48.95% of the vote to Tymoshenko's 45.47%. Tymoshenko alleges fraud and is openly critical of Yanukovych. She loses her position as prime minister in March.

August 2011 - A court motion calls for Tymoshenko's arrest. The arrest is in connection to a 2009 gas contract negotiated when she was prime minister. Tymoshenko brushes off all charges against her as political, calling the trial a "farce."

October 2011 - Tymoshenko is found guilty of criminally "abusing her office" over the 2009 gas deal with Gazprom. She is sentenced to seven years in prison.

November 21, 2013 - President Yanukovych backs out of a trade deal with the European Uniondue to pressure from Russia. Street protests begin in Kiev.

December 17, 2013 - Russian President Vladimir Putin agrees to buy $15 billion of Ukraine's debt and reduce the price of natural gas supplied to the country.

January 16, 2014 - President Yanukovych signs laws restricting the right to protest. This leads to large numbers of protesters in Kiev and clashes with police. The law is repealed on January 28.

February 21, 2014 - Negotiations lead to a deal which reduces President Yanukovych's powers as president and rolls back parts of the Constitution.

February 24, 2014 - An arrest warrant is issued for ousted President Yanukovych.

March 1, 2014 - The upper house of the Russian parliament votes to send troops into Crimea on the same day the pro-Russian leader of Crimea, Sergey Aksyonov, asks Putin for help in maintaining peace.

March 2, 2014 - Ukrainian Prime Minister Arseniy Yatsenyuk says of Russian troops in the Crimean peninsula, "This is a red alert. This is not a threat. This is actually a declaration of war to my country."

March 3, 2014 - Ukrainian Ambassador Yuriy Sergeyev tells an emergency meeting of the U.N. Security Council that Russia has used planes, boats and helicopters to flood Crimea with 16,000 troops in the past week.

March 6, 2014 - Crimea's parliament votes to hold a referendum on leaving Ukraine and becoming part of Russia. The referendum is scheduled for March 16.

March 17, 2014 - United States and European Union officials announce sanctions on more than two dozen Russian officials and their allies in Crimea. Crimea's regional parliament applies to join with Russia and in Moscow, Russian President Vladimir Putin signs a decree that recognizes the independence and sovereignty of the Republic of Crimea.

March 18, 2014 - In Moscow, Russian President Vladimir Putin signs an annexation pact with the Prime Minister of Crimea and the mayor of the city of Sevastopol.

March 18, 2014 - In response to masked gunmen killing a member of Ukraine's military, wounding another and placing the rest of the staff of a base in Crimea under arrest, the Defense Ministry authorizes its forces in Crimea to use weapons "to protect and preserve the life of Ukrainian soldiers."

March 21, 2014 - Ukrainian Prime Minister Arseniy Yatsenyuk, in Brussels, signs the political elements of a trade pact with the European Union.

March 27, 2014 - The International Monetary Fund agrees to allow Ukraine to borrow up to $18 billion over the next two years. The U.N. General Assembly approves a resolution stating Crimea's succession referendum from Ukraine is not valid; the resolution's vote is 100-11, with 58 abstentions.

April 15, 2014 - Acting President Turchynov tells the country's Parliament an "anti-terrorist operation" is under way in Ukraine's restive eastern Donetsk region. Tensions have soared in recent days in eastern Ukraine, where pro-Russian rebels have seized government and police buildings in as many as 10 towns and cities.

May 25, 2014 - Petro Poroshenko declares victory in Ukraine's presidential election, following preliminary exit polls that suggested he got 56% of the vote.

May 27, 2014 - Authorities announce that a battle between pro-Russian rebels and government forces at Donetsk airport has claimed 40 lives.

June 27, 2014 - Ukraine signs a trade deal with the European Union, the same agreement that former President Viktor Yanukovych backed out of in 2013.

July 17, 2014 - Malaysia Airlines Flight 17 crashes in eastern Ukraine after being shot down by a surface-to-air missile, according to the United States. All 298 people aboard are killed.

September 20, 2014 - Ukraine and pro-Russian separatists agree to a ceasefire.

October 26, 2014 - Ukrainians vote in parliamentary elections. Ukrainian citizens in Russia-annexed Crimea and the eastern areas controlled by pro-Russian separatists do not participate in the elections because of ongoing violence. President Petro Poroshenko hails exit poll results and says the projected outcome gives "a powerful and irreversible backing to Ukraine's path to Europe."

January 26, 2015 - President Poroshenko announces the Ukraine will ask the Hague tribunal to investigate alleged "crimes against humanity" in the conflict in eastern Ukraine.

February 5, 2015 - With U.S. Secretary of State John Kerry by his side, Ukrainian Prime Minister Arseniy Yatsenyuk says the Russian military is on the ground in the country.

February 12, 2015 - Peace talks end in a breakthrough: A ceasefire and an agreement for both sides to pull back heavy weapons. In March, heavy weapons are pulled back from the front lines, but the violence continues.